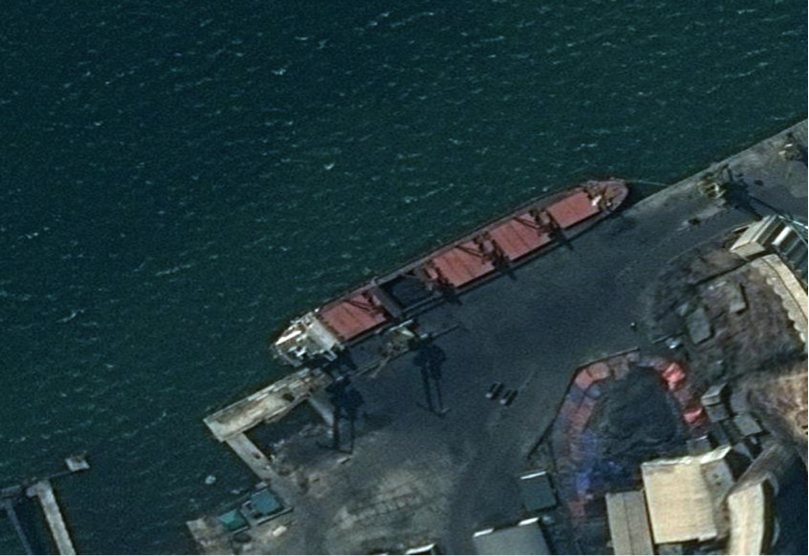 This satellite image provided by the Department of Justice shows what the DoJ says is the North Korean cargo ship Wise Honest docked at a unknown port. The Trump administration has seized the North Korean cargo ship used to supply coal to the isolated nation in violation of international sanctions, law enforcement officials said Thursday, May 9, 2019. The seizure of the vessel, detained last month in Indonesia, comes at a delicate moment between the two countries. (Department of Justice via AP)

SEOUL, South Korea (AP) — The United States has made a highly unusual seizure of a huge North Korean cargo ship involved in banned coal transports. But it’s nothing new for North Korea, which has long gone to extraordinary lengths to bypass crippling U.N. sanctions and earn the impoverished nation much-needed hard currency.

The seizure, which was announced Thursday, comes at a delicate moment in U.S.-North Korean ties, with North Korea resuming weapons tests that seem meant to force the United States to ease sanctions. Whether it worsens those ties could depend on if, as some experts believe, the North continues finding ways to evade the international sanctions on its exports.

Here’s an examination of the seizure of the Wise Honest, the North’s second largest cargo ship, and how it fits into North Korea’s alleged illicit pursuit of hard currency:

Before the United States seized it, the 581-foot (177-meter) ship was first detained by Indonesia in April 2018 while transporting a large amount of coal.

Indonesia reported last September that the Wise Honest was registered under the jurisdictions of both North Korea and Sierra Leone, according to a March report by the United Nations Security Council. It said the ship sailed into Indonesian territorial waters with its Automatic Identification System turned off and “no report was made to the destined port authority for proper ship clearance.”

Justice Department lawyers on Thursday laid out the case for confiscating the ship in a complaint filed in New York. They said payments for maintenance and operation of the vessel were channeled through unwitting U.S. financial institutions in violation of American law.

GETTING SMATER AT EVADING SANCTIONS

The Wise Honest is one of dozens of vessels North Korea has apparently used to deliberately evade international sanctions on coal exports and oil imports.

The U.N. report said North Korea’s illicit trade activities include rapidly growing ship-to-ship transfers of petroleum products and coal, and that those activities are meant to render U.N. sanctions ineffective.

The report said North Korean vessels use advanced evasion techniques like identity theft, unlawful name-changing and sending false signals through a ship’s AIS tracking device, which communicates the ship’s location to other vessels, satellites and coastal base stations.

The Wise Honest, which was transporting 25,500 tons of coal worth $2.99 million at the time of its impoundment in Indonesia, tried to avoid detection by illegally registering under the jurisdictions of two countries. The report said the ship was also sailing without hoisting a nationality flag.

Indonesia named a South Korean company, Enermax, as the intended recipient of the Wise Honest’s coal, which was to be moved ship-to-ship in the port city of Balikpapan on Borneo island. Enermax told South Korean investigators that there was no import of coal and that it had received an offer of Indonesia-origin coal from “someone who seemed to be a local broker in Indonesia.”

The U.S. seizure will anger North Korea, which sees a lack of U.S. rewards to match partial disarmament steps the North took last year. North Korea on Thursday fired two short-range missiles into the sea in the second such weapons launch in less than a week, according to Seoul and Washington.

U.S. authorities might have taken action and seized the Wise Honest because they worried that Indonesia, which has maintained friendly ties with North Korea, was possibly going to return the ship to the North, said analyst Go Myong-Hyun of the Seoul-based Asan Institute for Policy Studies.

In response, North Korea may strongly criticize the United States and conduct more weapons tests. But North Korea won’t likely retaliate by seizing a U.S. ship because it wants to quickly get back the Wise Honest.

“North Korea doesn’t have many big ships it can use for exports. If this size of ship is seized and that seizure isn’t lifted quickly, it would greatly damage North Korea,” said analyst Cho Bong-hyun of Seoul’s IBK Economic Research Institute.

U.N. sanctions on the North have intensified since 2016, because the North conducted a series of high-profile nuclear and missile tests meant to build a nuclear missile capable of striking the U.S. mainland. Newer sanctions imposed a full ban on key exports like coal, textiles and seafood; significantly curtailed oil imports; and required all U.N. member states to repatriate all North Korean laborers based in their countries by this December.

The United States may return the ship to North Korea if relations improve.

“The U.S. action could be more like a warning aimed at preventing North Korea from violating sanctions again rather than not sending it back for good,” Cho said.